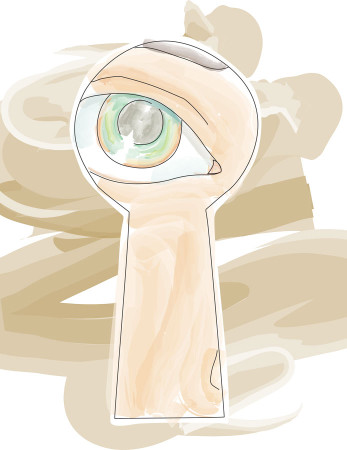 In the past few years, JC has taken measures to monitor student action more closely, both regarding technology and around the school.

The Acceptable Use Policy was instated with the arrival of laptops at JC, setting a guideline for student actions on their personal laptops. The policy appears on JC Lenovo laptops, where students are required to agree in order to log onto their computers.

The policy states that laptops can be used in a positive educational manner, but “the use of John Carroll’s network and computers is a privilege and not a right.” It says that the school has the right to search all files and emails on a student’s laptop.

The Acceptable Use Policy continues on to list the parameters of students’ laptops, including restrictions on illegal downloads and bullying. It also includes that, via the Children’s Internet Protection Act, JC is required to prohibit children 16 or younger from viewing obscenities and pornography.

“[JC] knows students are goofing off. If students want to focus, they will,” said junior Nick Lewis.

In The Patriot survey on Jan. 10, 2014, a student defined the Acceptable Use Policy as, “The ability for JC to track my laptop and the actions I make on it.” Another student said, “I don’t really know. I feel this is a lie everyone tells, clicking on the ‘I agree’ to the terms and conditions without actually reading them.” Only 0.8 percent of students could define the policy in the survey.

If violated, students could have their internet access and email revoked, face legal action by the school or other involved parties, or receive disciplinary action, including dismissal.

During the Christmas break of 2009, surveillance cameras were installed both outside and inside the school, accessible by administration.

[JC] knows students are goofing off. If students want to focus, they will.”

The camera feeds are monitored, “normally as a result of an incident,” former Dean of Students Thomas Vierheller said. The majority of students, 87.2 percent, believe that the JC administration has the right to set up surveillance cameras, most say because it can protect JC.

Some students agree that this measure is necessary, and according to one person who responded to The Patriot survey, “it keeps students out of trouble. Not everyone is trustworthy or does the right thing. Having security cameras means the school can be more proactive in stopping kids from doing the wrong thing.”

100 percent of students say that they know of the surveillance cameras, and 15.4 percent say that they or a friend have received punishment for something caught on the cameras. While they are located throughout the interior and exterior of the school, it is illegal to have them in bathrooms or locker rooms, and JC has not installed any in the student parking lot.

According to the student handbook, “users have no claim to privacy or protection from discipline if the content is openly available on a public site.” The handbook gives the example of a public twitter account being monitored by the administration.

“[Social media] is not monitored unless there is some reason to think something’s going on,” Vierheller said. He also mentioned that much of the content they look at is sent to the administration anonymously.

Any methods of checking on students are “a resource to go back and investigate or a measure to keep the students safe,” Vierheller said. Lewis believes that the administration surveilling students is not really an issue because “we give all the information away freely, we don’t care.”

Madison Meyer is an In-Depth Editor for The Patriot and jcpatriot.com.