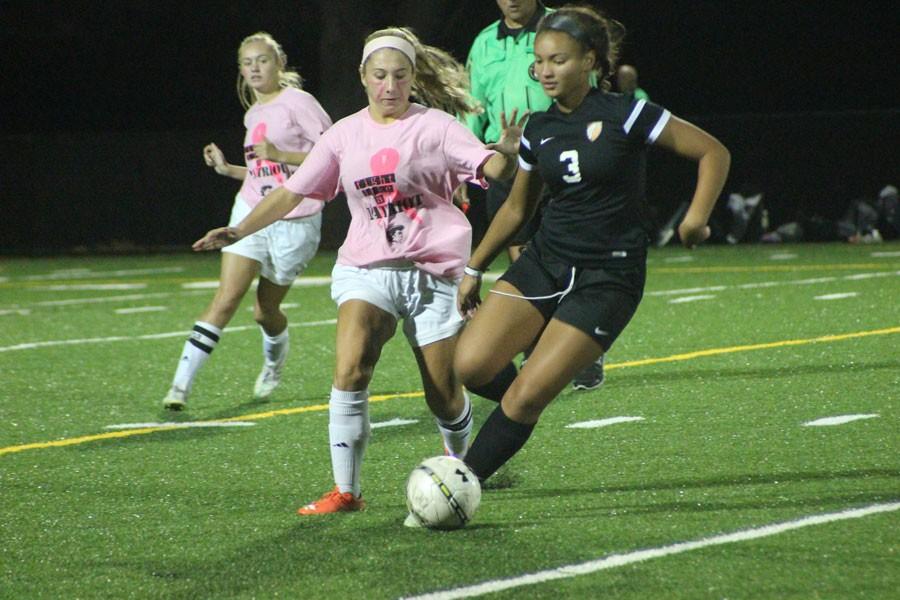 Senior Julianna Butta defends a McDonough player for the ball during the Oct. 13 match against McDonough which ended in a 11-0 loss for the Patriots. The women’s varsity soccer team finished the year with a 5-8-1 record.

“I thought that we could have done better, but we tried our best,” senior forward and captain Mary Kate Gerety said.

Other teammates agreed that there were positives to this season. “I think we did well even though we were sort of a new team with a lot of freshmen,” junior defender Audrey Anderson said.

Off the field, everything went well with the team, according to Gerety. “Off the field, relationships were good. I did everything I could to make the team a friendly environment, and I made a lot of new friends,” Gerety said.

However, the on the field relationships were not as good as those off the field. “Our biggest struggles were our new faces on defense. They worked well, but the gel [between them] didn’t happen until later in the season,” head coach Hayley Howe said.

One of the positives during the season was the C. Milton Wright game. Both Anderson and Gerety said that the victory was the highlight of their year. “It was my senior game, too, which made it even more special,” Gerety said.

Before the season started, the team challenged themselves to score more goals. They were successful, scoring 22 times this year, compared to only seven last year.

“The girls came to practice ready to play and ready to learn. If you came to one of our practices, you wouldn’t have been able to tell that we were on a four-game losing streak or something, and as a coach, that’s something to be proud of,” Howe said.