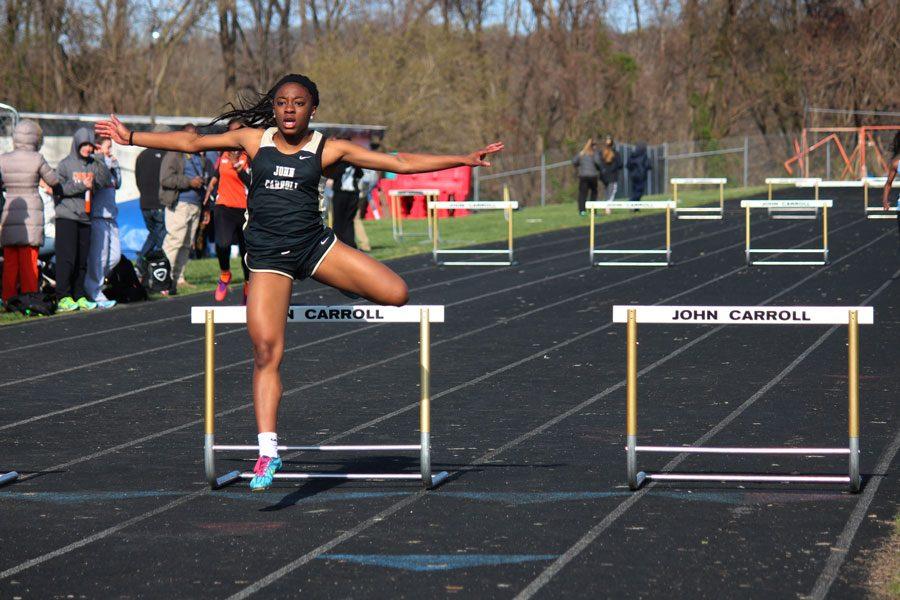 Sophomore Chika Chuku jumps over a hurdle during a race. The women’s track team finished with a record of 9-3 and came fourth in the championship.

The women’s track team finished fourth in the championship and with a 9-3 record on the season. “I am very proud of our team this season, there were several contributors all around,” head coach Rob Torres said.

According to senior sprinter and hurdler Holly Driver many people on the team raised their skill level and contributed all year. “I’m definitely proud of the team this year because we all stepped up, including the underclassmen,” Driver said.

While some athletes on the team achieved personal records, many set school records as well. “My favorite memory from this year was definitely when we beat the 4×400 record,” Driver said. The team finished their season breaking seven records and establishing themselves in JC history.

Although the team didn’t win the championship they so desired, the entire team has definitely left their mark on this year. “I loved my time on the JC track team and I am grateful that I have been able to be on it since freshman year,” senior hurdler Kristen Isoldi said.

The team will lose their top runners with the seniors that are departing. Although, Torres are optimistic the team will have success for next season. “Kristen and Holly […] you can’t completely fill them they are all around amazing. We do have a good young group of sophomore runners, however, that will step up in their role,” Torres said.