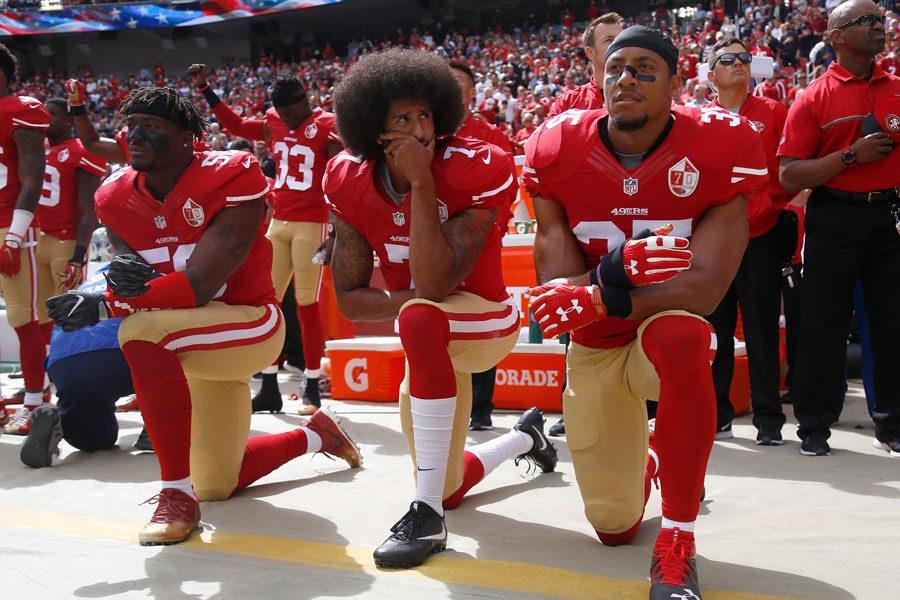 From left, the San Francisco 49ers' Eli Harold, Colin Kaepernick and Eric Reid kneel during the national anthem before their NFL game against the Dallas Cowboys on October 2, 2016, at Levi's Stadium in Santa Clara, Calif.

As stated in the First Amendment of the United States Constitution, all American citizens have the right of freedom of speech. It is one of the rights that makes our country great. However, for some reason when public figures exercise their freedom of speech, they are criticized.

Most recently, Colin Kaepernick, the quarterback for the San Francisco 49ers, drew a lot of media and public attention due to his decision to kneel during the playing of the National Anthem in protest of the discrimination experienced by minorities.

Even though this is a form of peaceful protest protected under the First Amendment, Kaepernick is receiving backlash for his actions. He is being called arrogant and un-American, even though he is just standing up for a cause that he believes in.

Martin Luther King Jr. was not labeled as an un-American when calling out racial prejudice against minorities in America, so why is Kaepernick? Why does the so-called “disrespect” of a material object and accompanying song completely undermine the honorable message that Kaepernick is trying to convey?

Although you may not agree with Kaepernick’s statement that there is still racial prejudice today in this country, there are no grounds to criticize him for his actions. It is a peaceful protest and in no way causes harm to anyone.

As opposed to those who took part in the protests and following violence as seen in Baltimore and Ferguson, Kaepernick is conveying his message peacefully and expressing his own personal beliefs.

Instead of being criticized, Kaepernick should be regarded as an honorable man for speaking out on an issue that he strongly believes in regardless of the consequences. In this way, I do not see how he is being treacherous and un-American.

The formation of our country can be attributed to men who, like Kaepernick, spoke out on an issue that they believed in and took action. What interests me though, is that when our Founding Fathers dumped tea into the Boston Harbor, committing a criminal act, it was courageous and applauded, but when Kaepernick makes a stand peacefully he is made out to be a villain.

Elizabeth Harmison is an In-Focus Editor for The Patriot and jcpatriot.com.

My real issue with Kaepernick’s “protest” is the disrespect he has shown and is continuing to show. He is disrespecting the hundreds of thousands of Americans who have fought and died for the flag of the country he lives in.

Colin Kaepernick is disrespecting the Americans who defended the freedoms we all take for granted, like, in this case, freedom of speech.

“I am not going to show pride in a flag for a country that oppresses black people and people of color,” San Francisco 49ers quarterback Colin Kaepernick said. “To me, this is bigger than football and it would be selfish on my part to look the other way. There are bodies in the street and people getting paid leave and getting away with murder,” said Kaepernick in an interview with SB Nation.

He is sitting during the national anthem, the song written to honor the American flag and the lives lost in order to defend it. Although he has now chosen to kneel, the point remains the same. The song was not written to honor the government, nor the law enforcement officials who are actually discriminating against people of color.

Does he have the right to free speech and the right to peacefully protest? Sure – yes he does. Do you know who defends those rights that he is taking advantage of? American men and women who volunteered to serve in the armed forces.

Kaepernick’s protest is taking a problem and pointing it in a direction that is negative. If he wanted to try and improve the problems, he would select a more appropriate way to protest racism. Instead, why didn’t he create a campaign specifically targeting systemic racism?

Instead of trying to promote his cause in a manner that would appeal to those who can make changes, he made a statement that presented himself as someone with no respect to authority or the country he lives in.

James Keller is a Copy Editor for The Patriot and jcpatriot.com.