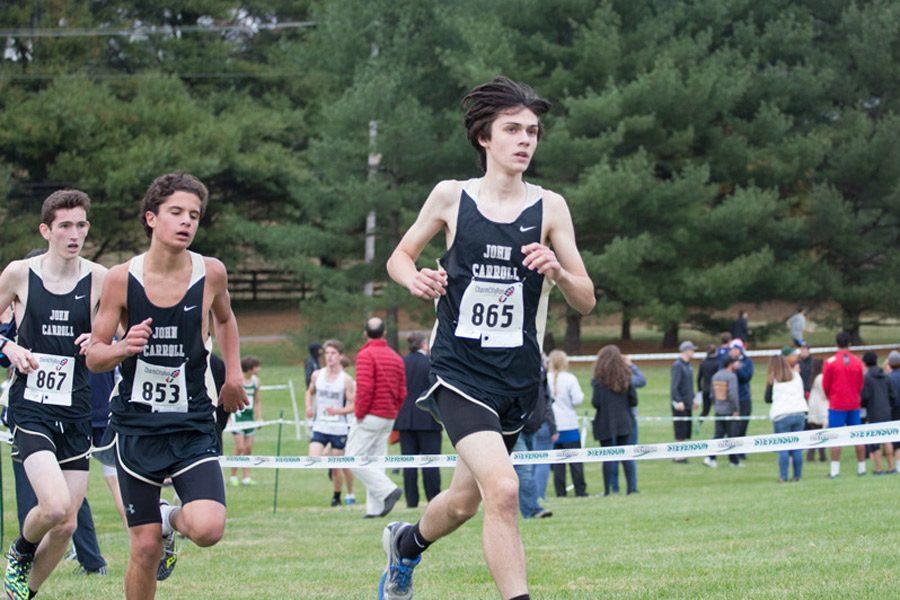 Sophomore Jack Plumer races in the cross country championships at Stevenson University on Nov. 1. The team finished in second place with a score of 60 points in the varsity B Conference.

The men’s varsity cross country team finished their season with a 6-1 in-conference record, tying for first place with Park School and Boys’ Latin. In the MIAA B Conference Championships on Nov. 1, the team captured second place, coming in behind Park School.

Coming into the season, the team expected to face some stiff competition against their rival, Boys’ Latin, but Park School put up a fight this year. “We weren’t expecting it because we had destroyed [Park] last year, but their remaining runners really improved,” Monaghan said. “They caught us off-guard, and it ended up the same way in [the] championships.”

Seemingly out of nowhere, Park School beat JC in their league meet on Oct. 19, and then again in the championships. Still upset over the loss, the team wishes that they had performed better. “I think we ran how we usually did, but we had to do better if we wanted to win,” junior Evan Tridone said.

Sullivan agreed that the team could have ran harder, but noted that they had given it their best shot. “I could’ve ran harder. There were a couple kids ahead of me that I could’ve passed, but it was just one of those days,” Sullivan said.

Despite the loss, the team is confident that they will come back next year to contend for first place. “I expect that we will win the championships not only next year, but in the next two years to come,” Monaghan said.