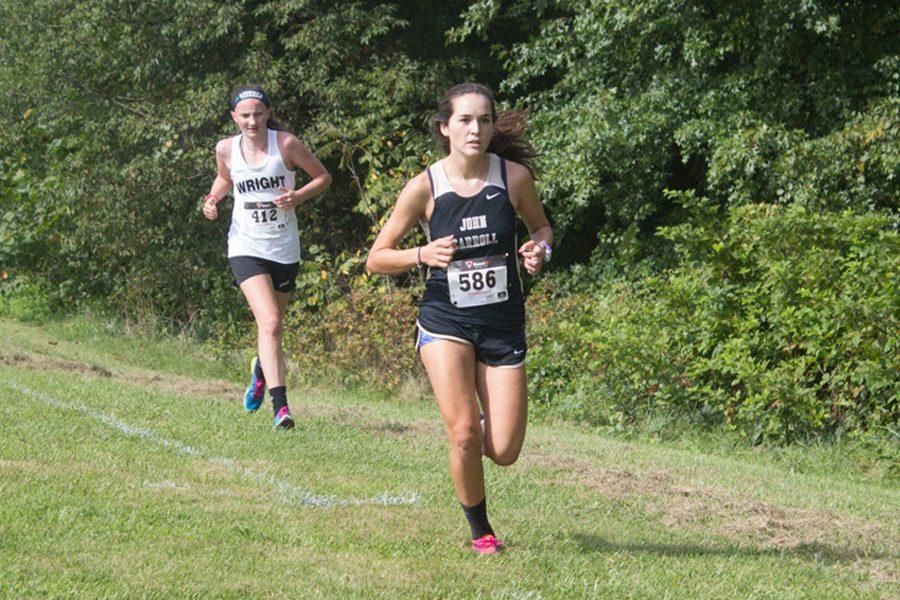 Junior Laura Amhrein passes an opponent on her way to the finish line at the Mustang Invite on Sept. 2. The women’s cross country team finished with a 2-5 record in-conference this year.

The varsity women’s cross country team finished the year with a 2-5 in-conference record. They also finished sixth overall at the IAAM A Conference championships on Oct. 25.

The top runner on the team was senior Adria Pirozzi, with juniors Rosemary Gillam and Laura Amrhein, freshman Bryn Fitzkee, and sophomore Kiersten Euler rounding out the top five, according to head coach Robert Torres.

Part of the sub- .500 finish this year was a result of the lack of varsity experience. “A good chunk of the team was brand new,” Torres said, “only two girls that were on varsity last year were on varsity this year.”

Another factor was that the amount of runners was low for the team, due to the loss of many seniors and injuries sustained by Gillam and junior Chika Chuku. “Our team was really small. We could all fit on the mini-bus,” Chuku said.

There were still positives from the season, however. “The girls bonded well and really improved as the season went on,” Torres said.

Even with a relatively rough season, the team is looking at a bright future, as they return all their top runners other than Pirozzi, and bring in a strong recruiting class. “There are a couple eighth graders who can come in next year and make a big impact,” Torres said.

If the team builds on the good things from this year, and hopes to see much more success next year. “The potential is very strong, it’s a matter of the desire to do well,” Torres said.

“Even though we didn’t win, it was a great senior season and I couldn’t ask for a better team,” Pirozzi said.

Daniel Robinson is a Sports Editor for The Patriot and jcpatriot.org