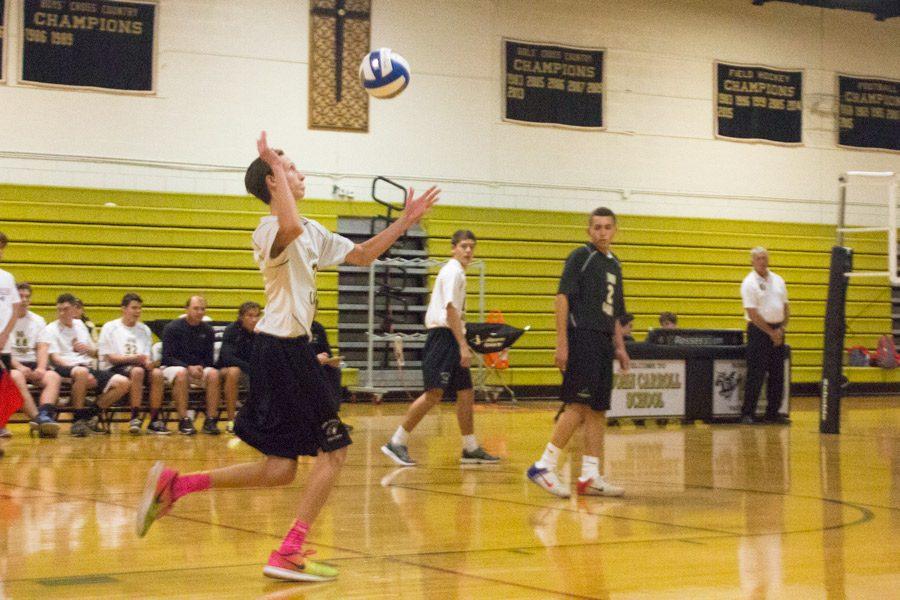 Senior outside hitter Franklen Lockhart serves the ball against Calvert Hall on Oct. 28. The men’s volleyball team finished their season with an overall record of 2-16.

The men’s varsity volleyball team finished the year with a 3-11 record overall.

The main problem that contributed to most of the team’s losses was their lack of size. “We weren’t a very tall team and didn’t have very good setters,” senior outside hitter Franklen Lockhart said.

Where the team lacked in offense, however, they made up for in defense. “We were a very scrappy team who played very solid defense,” senior defensive specialist Garrett Hefner said.

This defensive strength helped the team win a set against Boys’ Latin on Sep. 14, which according to several players, was the high point of the season. “ [Boys’ Latin] went to the semi-finals this year, and they always have a good team, so it was really fun when we won a set against them,” Lockhart said.

Above all the players valued the time they got to spend with one another. Many of the players are good friends and spend a lot of time together off of the court. “Practices and bus rides were always the best,” Hefner said. “I’ll miss those the most next year.”

Head coach Aric Moss was not available to comment.

Daniel Robinson is a Sports Editor for The Patriot and jcpatriot.com.