How will this affect JC?

Lena walks into a cramped room, and a cloud of smoke engulfs her in the hazy atmosphere. She sits down on an old couch for what seems like the thousandth time that month, as the smell of marijuana clouds her mind.

It is like any Saturday night: the TV is playing, and her friends are rolling blunts. Leaning over, a friend gives Lena a blunt and a lighter. Like a broken record, she starts to light up, but stops to think, “I could be drug tested Monday morning.”

She sits back and hands the blunt to the girl next to her. “Screw school. It doesn’t even matter,” her friend mutters. Leaning back, Lena sighs and says, “Nah …I’m pretty sure my future is more important than an hour high.”

Lena is a junior, but her name has been changed to protect her identity. Lena is one of many students directly affected by the new drug testing policy, which allows for random student drug testing.

This element of random testing has been added to the school’s previous drug policy, which only targeted students who were considered to be suspicious by the administration. The previous policy focused more on punishment rather than treatment. 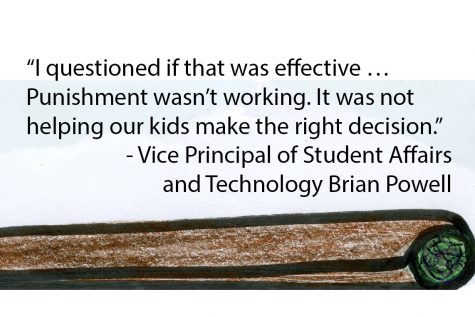 Punishments like suspension and expulsion are still possible under the new policy. However, they are applied under more narrow conditions such as when students decline treatment options or continuously fail drug tests.

The punishment-based approach to students’ drug use troubled Vice Principal of Student Affairs and Technology Brian Powell during his first few years as dean.

“I questioned if that was effective … Punishment wasn’t working. It was not helping our kids make the right decision,” Powell said. He believes that the current policy makes students more conscious about drug use and gives students a reason to think twice before using drugs.

According to Powell, reports of alarming student behavior by parents and friends in the school community brought about this new policy. He said that JC wants to prevent students from getting involved with “harder drugs,” and stop their casual drug use from spiraling out of control.

From 2003 – 2011, this was the drug testing policy that was in effect under Dean of Students Thomas Vierheller.

Who did it affect?

This program targeted student athletes and students in the theater program.

How did it work?

Students who turned themselves in were not harshly punished, while students who were caught faced consequences such as being excluded from athletics for 365 days.

Who was in charge of the process?

According to the 2007 Student Handbook, “John Carroll Assistance Committee (JCAC) supervised the process of the students’ assessment and recovery.”

Surrounding yourself with people involved in drug use can be harmful, according to health teacher Teresa Gauthier. “Using drugs is a crap shoot in the sense that you can be around people that do drugs and they can be fine, but you don’t know how they will affect you because everybody is different,” Gauthier said.

The policy has been in the works since the spring of last year. “We had some unfortunate incidents, and they had us moving in the direction [of the new policy],” Powell said.

A survey on Nov. 2 found that out of 171 students who responded, 54.12 percent take issue with the random testing, saying it is a violation of their privacy. “I think the school should stay out of our personal lives. If we choose to smoke outside of school, it’s not any of the school’s business,” one sophomore said.

Administrators disagree with this opinion. “[I think the policy] isn’t an inappropriate invasion of privacy. I would submit to any random drug testing,” Powell said.

According to Powell, this policy gives students a reason to say no to drugs and is therefore a gift. “During the drug assembly with parents, the term ‘refusal skills’ was brought up. When you are around kids who are not from JC that don’t have the testing process, you can now say ‘no I might get drug tested at school,’ we want to give our students the gift of that. The extra strength to say no,” Powell said.

Some students agree with Powell about the policy. “I think it is fine that they are implementing this policy. Eventually the drug problem will get worse and if they don’t do something now, it will never get better,” one junior said.

However, according to senior Lola, whose name was also changed, the policy has led her to drink more heavily and smoke cigarettes as an alternative to marijuana because she assumes these two activities cannot be detected by drug tests.

“[When you smoke cigarettes] you can feel the stress leaving your body after you hold the smoke in for a while. I need that 10 minute head buzz,” Lola said.

The Patriot interviewed several students who, like Lola, have decided to use cigarettes and alcohol because they believe these substances stay in their bodies for less time than other drugs. Others are moving on to harder drugs because they assume the school is not testing for them.

While these students have refrained from using marijuana, they say the problem of drug use at JC has not been completely solved because they have replaced one drug with other harmful substances.

“Instead, students are now doing molly, shrooms, and acid, which can damage someone’s body much more than marijuana,” one senior said.

Powell’s response to students’ attempts to replace drugs was one of confusion: “Why are you moving from one drug to another? Why do you feel the need to alter your reality?”

Paige Alban, Ianna Pirozzi, and Elizabeth Harmison are In-Focus Editors for The Patriot and jcpatriot.com.