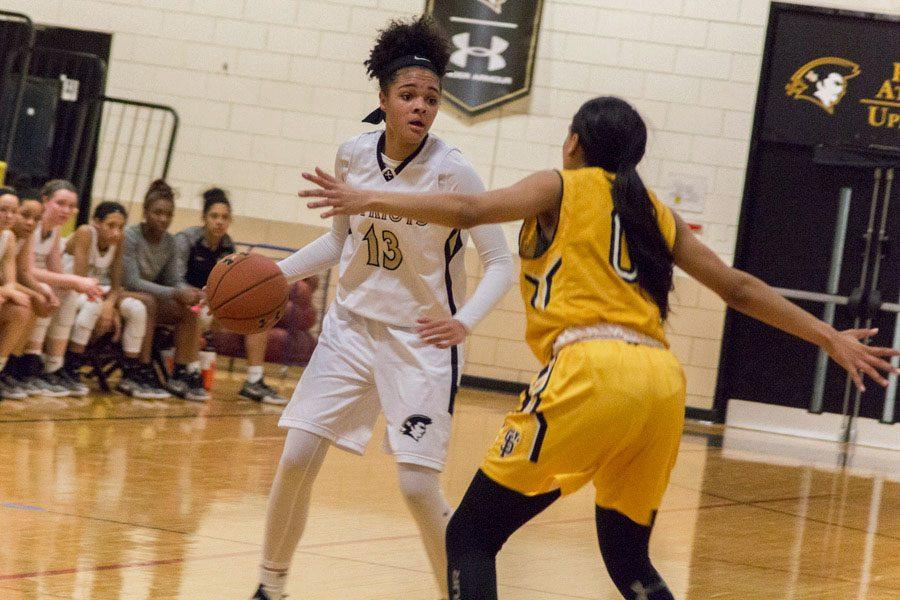 Sophomore Jordan Wakefield holds the ball while being defended by a St. Frances Academy player. The women’s basketball team finished the season with a 10-12 overall record with a 2-10 in-conference record.

This season, the women’s basketball team went 11-13 and finished sixth overall in the IAAM A Conference.

The team had a strong start at the beginning of the season going 11-2, but after the injury of junior point guard Savannah Simmons, the team went on to lose the next eight games. “I think we did better as a team this year than we did last year especially because we had a lot more team chemistry this year, and we all gelled fast and worked well together on the court,” junior guard Branyelle Carillo said.

Carillo’s favorite moment of the season was when the team went away to a tournament in South Carolina and they won the sportsmanship award collectively as a team. However, for junior guard Cassidy Kupchinskas, her favorite moment was beating Archbishop Spalding at home 57-51 on Friday, Jan. 6.

“It was a triple header, and we played right before the boys played Calvert Hall, so the gym was packed. The game was neck and neck the whole time, but with a minute left, we were tied and I hit back-to-back three pointers and we ended up winning the game,” Kupchinskas said.

Coach Craig Simmons looks forward to next season and is optimistic about the team’s rising talents, especially freshmen Vonnie Lidie and Julia Williams. “I am very excited about my two freshmen picking up where they left off this season, which was playing really well. I think our future is really bright with these two young ladies bringing outstanding talent to our team,” Simmons said.

This season was one of improvement for the team, and they plan to continue their progression in the offseason. “When the AAU (Amature Athletic Union) season is over, we will be in the weight room and in the gym getting better as a team,” Carillo said.

Over the summer, Coach Simmons will also be hosting camps that the players can attend to sharpen their skills. “I think we need to improve on our overall skill level as a team, like shooting, ball handling, and passing. I think if we do those things, we will be vying for a championship next season,” Simmons said.

Elizabeth Harmison is a News Editor for The Patriot and jcpatriot.com.