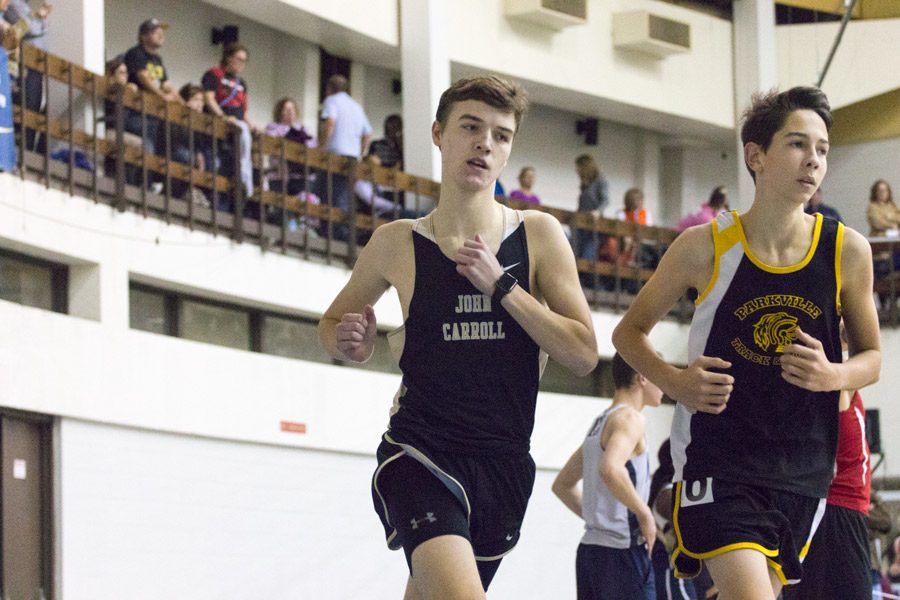 Sophomore Adam Spaeth attempts to pass an opponent in the 800 meter race. The men’s indoor track and field team traveled to the CCBC Essex Campus on Friday, Jan. 13, finishing in seventh place out of 13 teams.

With numbers down this year for both varsity and JV, the men’s indoor track team focused this season on rebuilding. The varsity team placed 11 out of 12 teams, and the JV team placed fifth out of 12 teams at IAAM/MIAA Indoor Track and Field Championships on Jan. 27.

According to distance coach Michael Monaghan, even though the team was fairly young, some of the freshmen and sophomore runners have great potential for future seasons. “We didn’t really have a varsity this year, just a JV and there were really only two boys at the varsity level, but that comes with a young team,” Monaghan said.

The team placed fourth for most of the meets but had some key performers including junior David Pajerowski in pole-vault and sophomore Bryan Stancliff in several distance events, such as the 800 meter relay and the 800, 1600, and 3200 meter dashes. “I think we did well for the amount of people that we have. I was proud that I was able to break five minutes [in the mile],” Stancliff said.

Sprinting and field events coach Robert Torres agrees with Monaghan that even though the team was limited in runners, they still have a lot of talent for future seasons. “With numbers down, there were a few who did well and consistently ran at the varsity level all year,” Torres said.

Junior Evan Tridone, who has run for three consecutive years, thought that overall this season was not the team’s strongest, but they were still able to compete in a lot of events. “This season, I improved in high jump and placed second. As far as running goes, I stayed the same, but with doing cross country in the fall running distance really helps,” Tridone said.

“Although we did poorly this season, both the team and practices were pretty fun,” Tridone said.

Anna Sullivan is an Entertainment Editor for The Patriot and jcpatriot.com