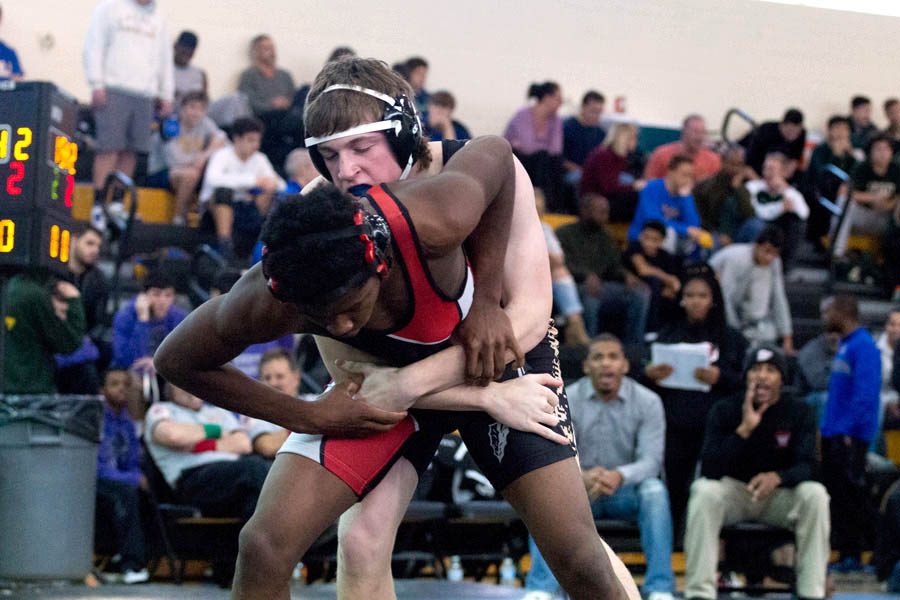 Sophomore Zack Haskell grapples with an opponent from Woodlawn High School in the Parkville Knightmare meet on Dec. 10. The wrestling team finished with a 10-13 dual-meet record.

This season, the men’s wrestling team focused on rebuilding after the loss of graduating seniors. The team has had a hard time recovering since the loss following the 2015 season, but were able to qualify for Nationals this year. The wrestling squad finished the season with a 10-13 dual-meet record.

As the team worked on fixing their structure, members of the team became very close, despite being plagued by many injuries. “[Injuries] affected us a lot. I’m pretty sure at one point half of our team was injured. You could say it was pretty unlucky,” junior wrestling captain Luke Strappelli said.

With many injured and missing players, the wrestling team had to forfeit multiple matches in dual meets. “We lost key starters in some of the weight classes, which resulted in forfeits for our team. This gave our opponents an edge in points right from the beginning in dual meets, tri meets, etc,” junior wrestler Zach Vest said.

Despite the hardships they faced, the team still managed to snatch 10 wins in dual-meets. According to wrestling head coach Mike Mazza, the team had good chemistry and hopes to capture a championship next year. “I’m excited to see what our team will accomplish next year. We were ranked in the top 20 in the state before we were plagued with injuries with 3 of our state ranked starters not finishing the season. We have a great freshman class coming in. We will be stronger next year,” Mazza said.

John Kyburz is a Contributor for The Patriot and jcpatriot.com.