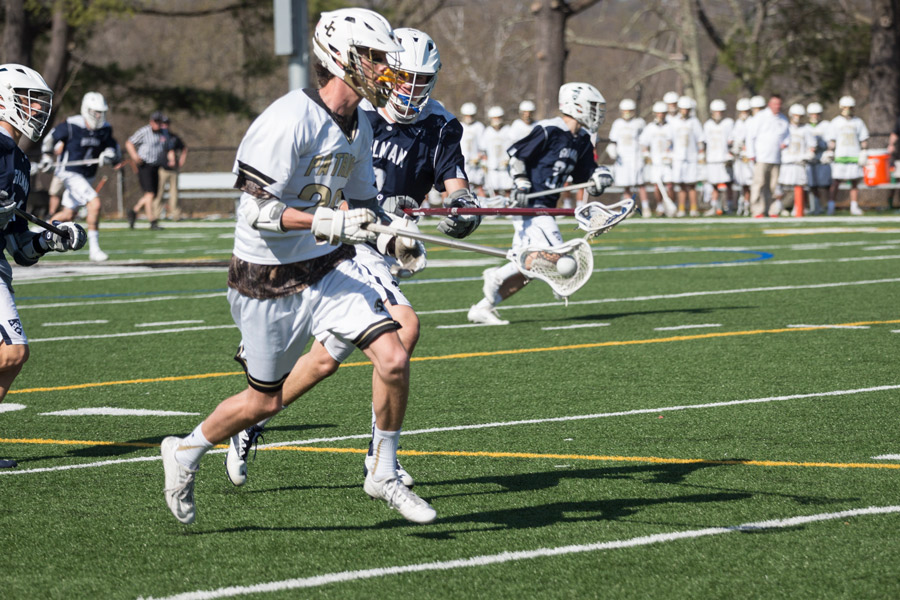 Senior Joe Rayman out-runs one of Gilman’s defenders in a home game. The men’s lacrosse team played against Gilman, an A-Conference team, on Tuesday, April 11 and lost the game with a score of 7-8.

The women’s softball team played three games in three days following Easter. For the first game on Wednesday, April 19, they traveled to Catholic High School and lost 10-20. The next day, they played Bel Air High School at home and lost 6-7. On Friday, April 21, the team played a home game dedicated to Autism awareness. Spectators were encouraged to make a $3 donation to be given to the Autism Society of Baltimore-Chesapeake, and they raised a total of $170. They faced McDonogh School and won with a final score of 7-6. Due to a disqualification, the score of this game was later changed to a 0-1 loss.

The women’s lacrosse team traveled to Roland Park Country School on Tuesday, April 18, and lost 9-11. They faced Maryvale Prep at home on Thursday, April 20, and won with a final score of 12-10. They played at home again on Saturday, April 22, against Dulaney High School and lost 12-16.

The women’s outdoor track and field team traveled to Maryvale Prep on Wednesday, April 19, to face off against them and Bryn Mawr. Although the meet was not scored, notable performances included Kothenbeutel, who placed second in the intermediate hurdles, and senior Adria Pirozzi, who placed first in the 1600 meter.

On Friday, April 21, they traveled along with the men’s team to Oakland Mills High School to compete in the Scorpion Invitational. Team scores were not recorded, but top performances came from Chika Chuku, who placed second in the 300 meter hurdles and third in the 100 meter hurdles, and Pirozzi, who placed third in the 3000 meter. Also, the distance medley relay team placed fourth. This team consisted of seniors Emily Stancliff and Pirozzi, junior Hadley Leishman, and sophomore Skylar Bensel.

The baseball team had a busy week, playing three home games in three consecutive days, followed by a game at Ripken Stadium. On Monday, April 17, they played McDonogh School and won 4-2. They played a tough game against Bel Air High School the next day and lost 2-11. They came back the following day and beat St. Mary’s with a final score of 5-2.

The men’s lacrosse team played two away games in the week following Easter, and won both by a substantial margin. On Tuesday, April 18, they traveled to St. Peter and Paul and won 16-7. On Friday, April 21, they played Gerstell Academy and won 15-5.

The men’s outdoor track and field team traveled to Oakland Mills High School on Friday, April 21, to participate in the Scorpion Invitational. Team scores were not recorded at this meet, but many players placed in their events. Rice placed second in the high jump and junior Druw Van der Werff placed third in discus.

Emily Stancliff and Christina Giovanazi are Sports Editors for The Patriot and jcpatriot.com.