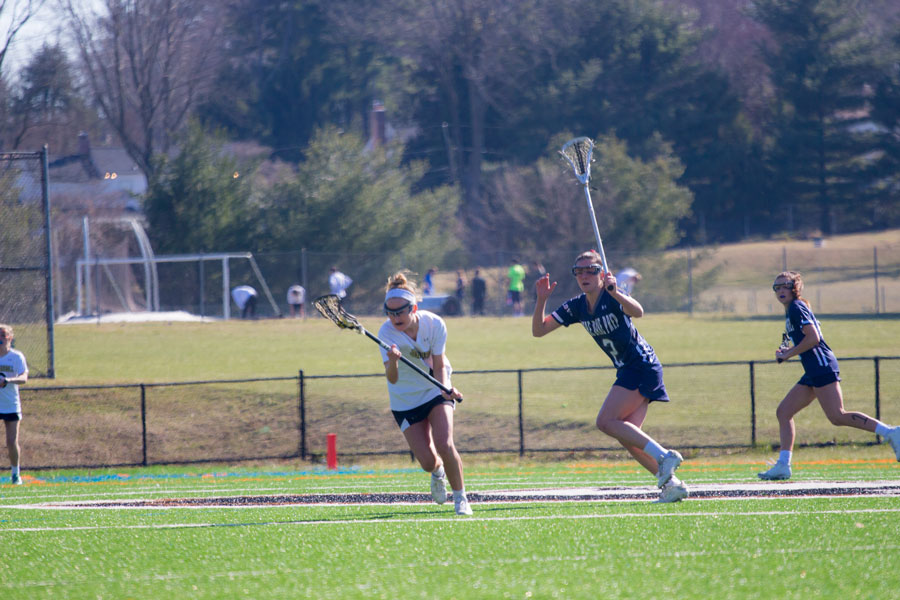 Senior Charlotte Haggerty cradles the ball with her stick as she runs past a defender from Notre Dame Prep. JC played NDP at home on Thursday, March 23 and lost 11-18.

The women’s lacrosse team finished their season ranked as the number 10 team in the MIAA A conference. With a team of mostly underclassmen this year, their season was focused on building their skills and learning how to work and play with one another.

“Our record does not show the talent and potential that we had this year, but I’d say we definitely grew as a team, and I think a lot of people on the team got better,” women’s varsity lacrosse coach Abby Swift said.

Returning junior midfielder Molly Lynch felt the team had a successful season. With the loss of 11 seniors from the previous year, the team spent a lot of time trying to fill those spots. “I think I really gave it my all and stepped up to the plate because I knew that was what I had to do to help my team get better,” Lynch said.

One young member of the team was freshman Katie Hormes. Working hard during her first year on varsity, Hormes thought that the team was welcoming. “We may not have won all of our games, but I think we got better and came closer as a team,” Hormes said.

The team faced different difficulties, such as a lack of older players throughout the season, but they learned how to overcome each of them. “Filling those spots [of seniors from last year] with a lot of new people and having everyone [come] together and get to know each other and play as one was at times, challenging,” Swift said.

“The thing that was hardest was to continue to work hard because we didn’t win a lot of games, but we still had to keep going,” Hormes said

While the team next year will not lose as many seniors as they did this season, the ones they are losing will still impact the team. “It’s definitely going to be a bit of an adjustment especially in the midfield because of the speed we’re losing. Three of our seniors were the fastest in the league,” Swift said

“We will still be very young, we’ll really have to come together [next year] and have a good chemistry to do well,” Lynch said.