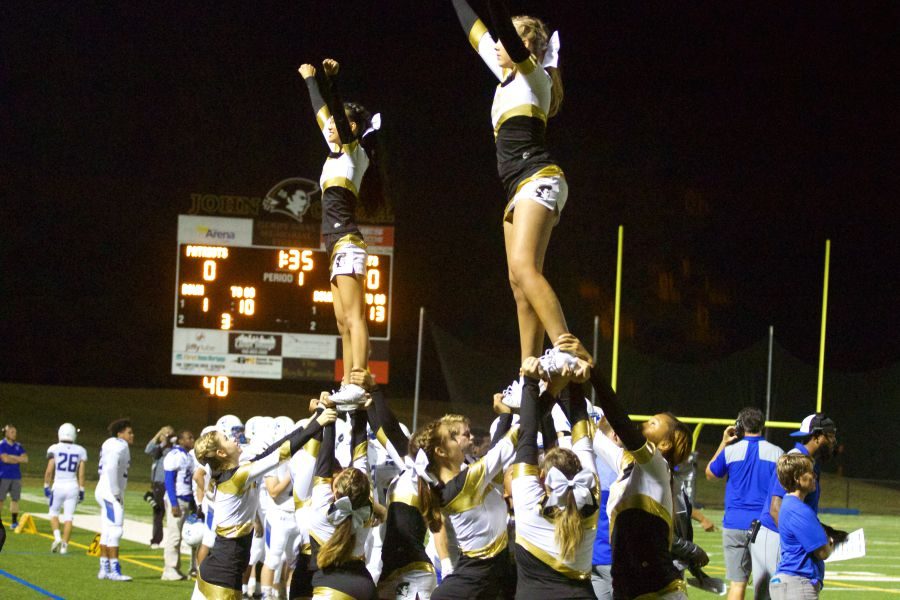 Members of the cheerleading team perform a stunt during the Homecoming game on Friday, Oct. 6. This season, the team was much smaller than previous squads and only had two stunt groups.

The team was also a lot smaller than in previous years, with only 11 girls on the team. However, according to Fitzpatrick, the smaller size did not prevent the team from improving. “A team of 11 is not always ideal, but with the right 11 girls, like we had this season, it made a whole entire difference. They all had to step it up 110 percent and contribute to make it a successful season,” she said.

The smaller size also allowed for a strong bond between the girls and enabled the team to focus on perfecting all of their movements. “Because the team was smaller we also didn’t have very many stunt groups, but because of that, the progress we’ve made from the beginning of the season until now for stunting has been great,” freshman Holly Saccenti, a new member of the squad, said.

Both Saccenti and Fitzpatrick believe that tumbling was a strength of the team this season because there were many newcomers with gymnastic backgrounds.

However, it wasn’t just the tumblers that made this season successful. “I don’t really think there was one particular MVP this season. I think it was all 11 of the girls because of the size of their team.  Everyone was willing to learn and take on the extra challenge,” Fitzpatrick said.

Next year, the cheerleading team is hoping to expand its size. “Even though we had a small team, I think we proved that we were able to make it through and get through it. I think because of that girls will be interested in joining next year, too,” Saccenti said.

Emily McLauchlin is a Copy Editor for The Patriot and jcpatriot.com.