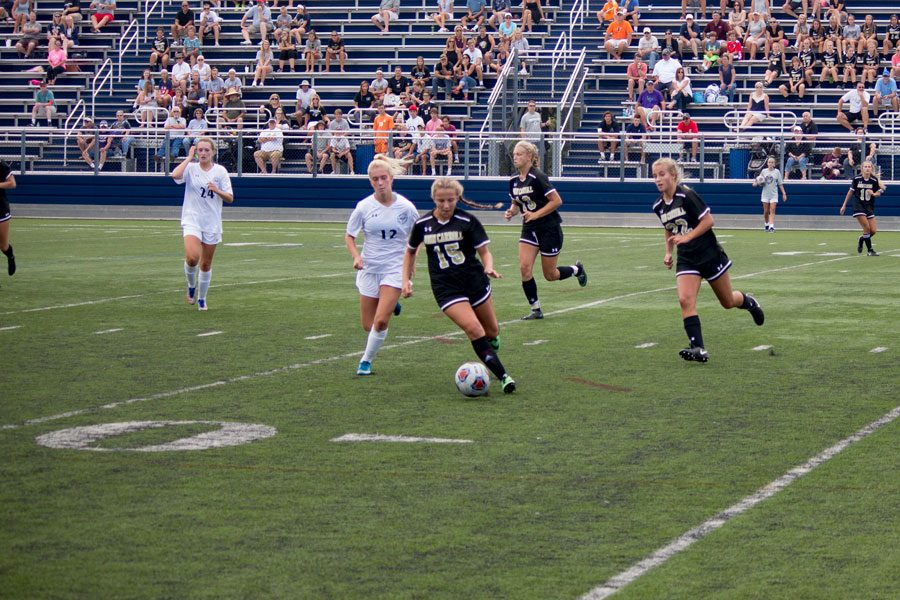 Freshman Julianna Smith dribbles the ball during the women’s varsity soccer game on Saturday, Sept. 16. JC won 3-2 in overtime as a part of the Battle of Bel Air.

The women’s varsity soccer season came to a close on Oct. 31, finishing with a record of 7-9-1.

“This wasn’t the outcome we wanted, but it was a progressive year for the team. I think we should be able to put together a full [two halves],” junior center back Georgia Ceanfaglione said.

The team had a key win against Mercy High School, a team that was once ranked number 14 by the Baltimore Sun, winning 2-1 on Oct. 6.

“For the past few years, we were very chameleon-like; playing to the other team’s level,” head coach Hailey Howe said. Howe is happy with how the team played this year.

The team had several big wins including one against Notre Dame Prep, which broke a four year losing streak against them, and Bel Air High School in the Commissioner’s Cup.

“This season also saw a strong push in recruiting and both the JV and varsity teams. Looking ahead, we’ll need to continue to build our strong defensive shape, but add to our creativity in the attack,” Howe said.

The hope for the team is that they will bounce back next year with a better season. They are stepping up their recruiting and have a few key players they are looking to step up next year.