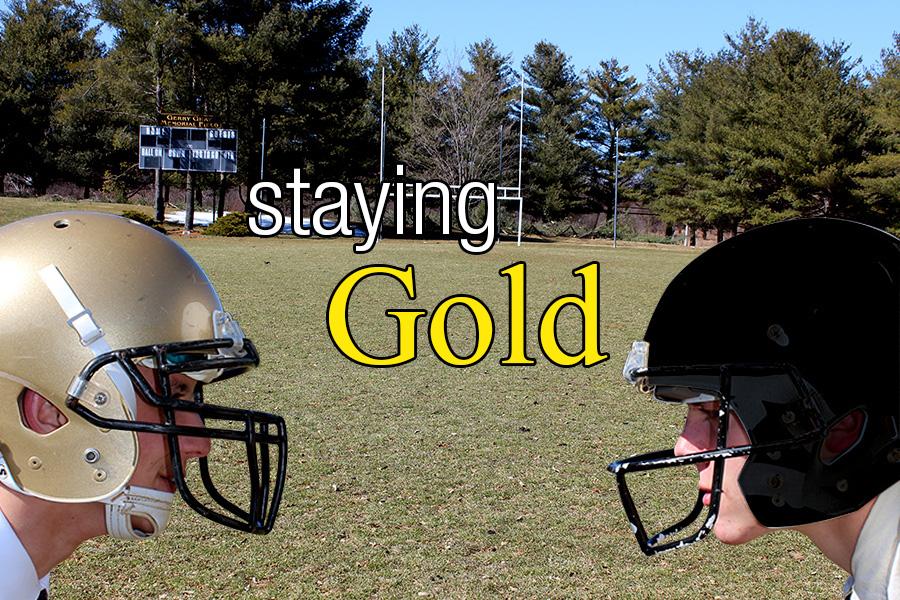 The football team wanted to change their uniforms by adding black helmets to their existing gold helmets. The proposed uniform change was announced at a football event on Feb. 7. This caused a strong response from alumni and other community members who wanted to stick with the traditional gold helmets.

On Mar. 24 President Richard O’Hara and head football coach Keith Rawlings announced to the players that the team would not be getting black helmets and would keep the existing gold helmets.

O’Hara said, “What I failed to realize [when considering the helmet change] was the importance of the [gold] helmet. We have to honor the past, serve the guys in the present, and light the way for the future.”

After the uniform change was proposed, there were pages of comments from players, coaches, alumni, administrators, and faculty on social media both in favor of and against the proposed change. People who opposed the change argued that it breaks the long-standing tradition of having gold helmets. Some posts about the helmets on JC’s Facebook received upwards of 80 comments.

Current player and junior captain Nolan Clawson defended the proposed uniform change on Facebook saying, “I love and respect the rich history of the ‘Gold’ helmets and respect all who have come before me. The John Carroll football program has grown so much and I feel that with growth here is also change! The black helmets are a great step for the program and are well liked by those who are playing in the present.” This post received over 50 comments both supporting and criticizing Clawson’s position.

“Gold is still a symbol of JC tradition. It’s a very rich legacy and bigger than one person,” Dan Gray, class of ‘89 and the son of former football coach and teacher Gerry Gray said. “The color of the helmet is a great tradition for [JC] to build off of.”

According to Dan Gray, the tradition of gold helmets started with his father Gerry Gray. “When JC first started, my father was the first football coach here,” Dan Gray said. Gerry Gray had originally played football at Notre Dame. “When he came to JC in 1964, he started the football program here. Back then, we didn’t have school colors. He said ‘I do not care about the color of the jersey, I want a gold helmet.’” That tradition stuck. “Years later [the helmets] are still a symbol of JC tradition. There is not another team in the county with a golden helmet,” Dan Gray said.

William Seufert, class of ‘70, was one of many who responded critically to the proposed uniform change on Facebook saying, “What was wrong with the gold? There are reasons for tradition, it connects all who enter the front doors no matter what year you entered.”

Former player John Kozak said on Facebook, “The gold has been a 50 year tradition and in my opinion as a former player [changing it] disrespects all who have been honored to wear it.”

During the discussion on Facebook things occasionally got heated, such as when Dan Gray called into question one coach’s dedication to the school saying, “My family has set up a fund that gives two scholarships a year to students that need financial aid and have demonstrated pride and excellence in the John Carroll community. As a coach at JC, what have you done to support and give back to the community in which you serve?”

Discussion of the helmets was an emotional issue for many. “A black helmet or gold helmet is not going to win games. It is what’s in here,” former coach Bill Mackley said, as he pointed to his heart.

Reactions from current staff and students were mixed. “One thing I told [O’Hara] – change is good, change is hard, but tradition is forever,” science teacher and former coach Tim Perry said.

O’Hara said, “I felt I hadn’t made myself aware of the depth of the feeling of that connection. A lot of us learned a lot this week.”

Dean of Freshman Students and former coach Sean Ireton agreed. “I believe that tradition is important, and some traditions are meant to continue and some not. I think the gold helmets are a good tradition to continue,” he said.

Junior Katie Benisch said, “[If I had to choose], yes they should stay gold, if they think they can find enough people to care about it to keep the gold, that would be good. They’ve changed the uniforms, obviously, and there’s no big deal about that.”

Senior Mitchell Russell said, “It’s one of JC’s few traditions, so keeping it gold keeps traditions alive.  Traditions are important and I think that they make a better high school experience.”