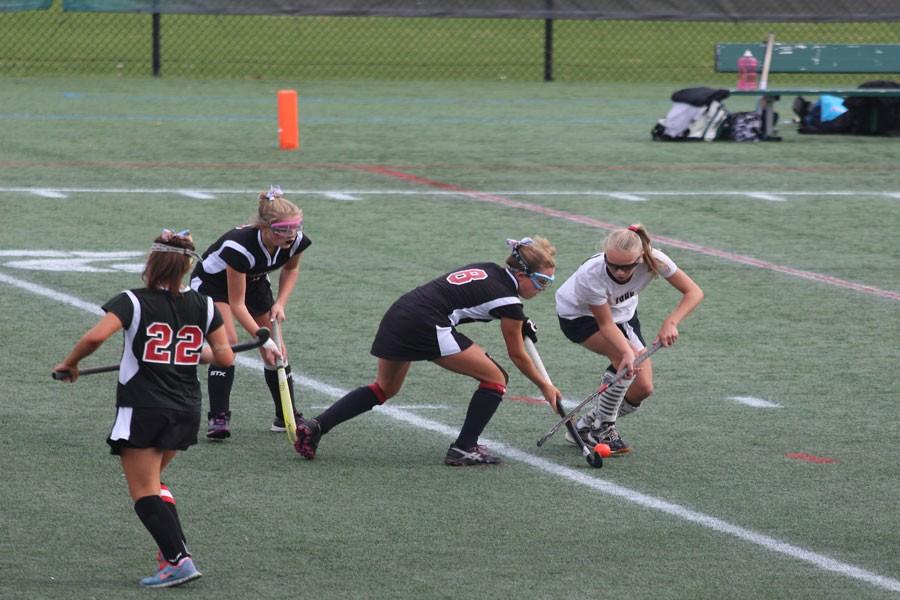 Ashlee Kothenbeutel attempts to take the ball away from a Maryvale player. The championship game was played at Stevenson University and resulted in a 1-0 victory and a second consecutive championship for the team.

The varsity field hockey team continued their reign as champions, claiming their second consecutive IAAM B conference championship. The final record for their season was 14-2 and JV finished with a 6-1 record.

On Nov. 1, the team played Maryvale in the championship game for the second consecutive year. They won the game 1-0 which was played at Stevenson University.

“I am really happy for our girls. People don’t understand how hard it is to repeat as champions, and go undefeated in order to do so, it is an amazing accomplishment,” head coach Gary Scholl said.

The team leaned on their defense this season, only giving up seven goals, but scoring 54 on the season. These statistics made them the best defense in the conference. The defensive stands were led by their junior goalie Emma Gromacki. Gromacki saved 98 of 108 shots, giving her a 91 percent save rating.

Hastings loved her experience with the team and believes they were very motivated to work and to win each game. “I had never worked with young athletes that worked so hard and came motivated and excited to be at practice everyday. Those 22 girls are every coach’s dream,” Hastings said.

In addition to their championship run, seven of the total 22 players on varsity were honored as being on the All-Harford County team: defensemen Claire Grunewald and Sam Carey, goalie Emma Gromacki, midfielders Charlotte Haggerty and Carly Lyon, and forwards Emily Stancliff and Katie Sullivan.

Senior varsity captain and right defender Sam Carey feels that this season was very special and achieved something great together. “The girls all wanted to play for each other and wanted to win,” Carey said.