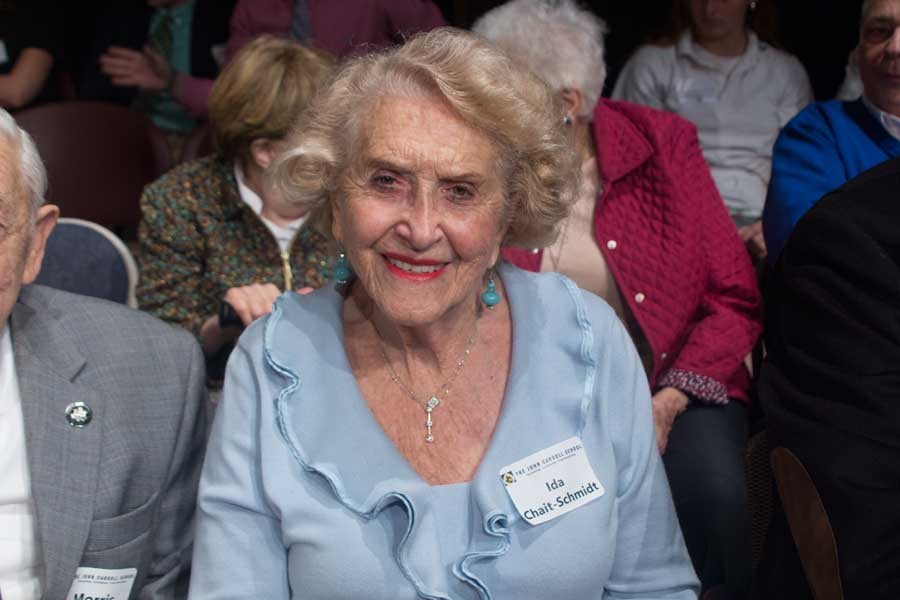 Little children tore her clothes, threw stones and rocks at her, and beat her repeatedly in the 100-degree heat of Uzbekistan, but still, this life was better than the one she had left in the frozen tundra of Russia. The eight-year-old Jew, Ida Chait-Schmidt, faced the reality of persecution that her fellow Jews faced during the Holocaust.

About 70 years later on March 1, 2016, Chait-Schmidt sits in front of seniors. She was one of the 20 speakers who came to share their or their relative’s stories of survival during the Holocaust.

“We came out like animals, just animals [after the Holocaust],” Chait-Schmidt says with a long pause and a shudder of her shoulders. Seniors stare, speechless, unable to comprehend the extent of the horrors they hear.

The now 85-year-old Holocaust survivor lived through death and work camps controlled by German S.S. officers. Stuttering her words, Chait-Schmidt recalls struggling through malnutrition and isolation, and that’s all she remembers from her childhood.

Shocking the group of students, Chait-Schmidt shares how she felt seeing and hearing of fellow Jews being burned alive by the Nazis. Hoping to avoid this perilous fate, Chait-Schmidt’s grandfather paid off a Russian train officer that helped his wife, Chait-Schmidt’s aunts, and her escape to the harshest, barely-livable part of Russia. “Just imagine, we took a small bag of a change of clothes into weather 30 or 40 degrees below zero. It was horrible, but that was our life,” she says.

Chait-Schmidt’s family was given no food during the train ride.

The class watches as she shakes her head remembering her disgust at her treatment from the Nazis. Students gasp at the reality she faced. Some put their heads down to process the information.

Trembling, Chait-Schmidt explains how her father tracked her down to Russia take her back home to Warsaw, which was still being bombed daily. Mustering a smile, she thanks God for her grandfather who refused her father’s request and instead demanded her father bring her mother and two-year-old sister to Russia.

Officers patrolled trains and threw anyone who made noise off the train. “Scared, my mom put little sugar cubes in my sister’s mouth so she wouldn’t attract attention by making noise. If she made noise, my family would’ve been shot,” Chati-Schmidt says.

There in Minsk, Russia, Chait-Schmidt received her first schooling. She walked about four kilometers to attend night classes after the non-jewish students finished their school day.

“They gave us ink, but no paper,” Chait-Schmidt says. “We were treated as nothing. They made us write in between the lines of newspapers.”

After living there for years, German and Russian relations worsened, and her family retreated to save their lives.

Pausing and collecting her breath, Chait-Schmidt’s hands shake as she tells the story of her journey in a cattle cart in a train for 30 days, with no sunlight.

Arriving in Uzbekistan, her family found themselves stranded on the streets with her baby sister on the brink of death. Chait-Schmidt received a small portion of salt-dust filled bread and water soup, and she split her ration with her sister who was ill.

“We had nothing. Nothing was ours. We were nothing,” Chait-Schmidt says.

In Uzbekistan, her family found a hut to live in for some type of shelter.

With a faint smile she says, “I call it a hut because that’s what it was. No metal, no brick, nothing, just hay with whatever else we could find.” Unable to recall the number of years she spent there, Chait-Schmidt seems annoyed with herself and settles for until the end of the year.

At the conclusion of the war, the struggles continued for Chait-Schmidt.

“They took us on trains. We had nothing to take this time. [We went] to displaced persons camps [that were] in Austria and Germany, which the Americans and French set up,” Chait-Schmidt says.

Chait-Schmidt braces herself, holds back tears, while she tries finishing her story, but she cannot. She bawls her eyes out in front of the students she shares her story with. Students look in awe, trying to grasp the weight of her words and power of her story.

Collecting herself while holding back the tears, Chait-Schmidt apologies for her break and continues telling her story. Students patiently wait with watery eyes.

With her tears still dripping, Chait-Schmidt shares the glimmer of hope in having a life worth living: America.

Her family received a visa and traveled by boat for nine days to New York City.

“The captain pointed to a lady. That lady was my liberation,” Chait-Schmidt says while crying. “Seeing the Statue of Liberty left me speechless. As soon as I got off the boat, we all kissed the ground.”

Time running short, Chait-Schmidt rushes to finish her story. With tears still rolling down her cheeks, she explains her gratitude for the Red Cross volunteers that greeted her with sweets and donuts when she got off the boat.

Continuing to cry, she reads a letter. “Remember my story. Remember the stories you are hearing. I’ve shared my story, you have to keep it alive and make sure no one lives through what I had to live through, the oppression Jews faced,” Chait-Schmidt says.
Kishan Patel is the Online Editor in Chief for The Patriot and jcpatriot.com.