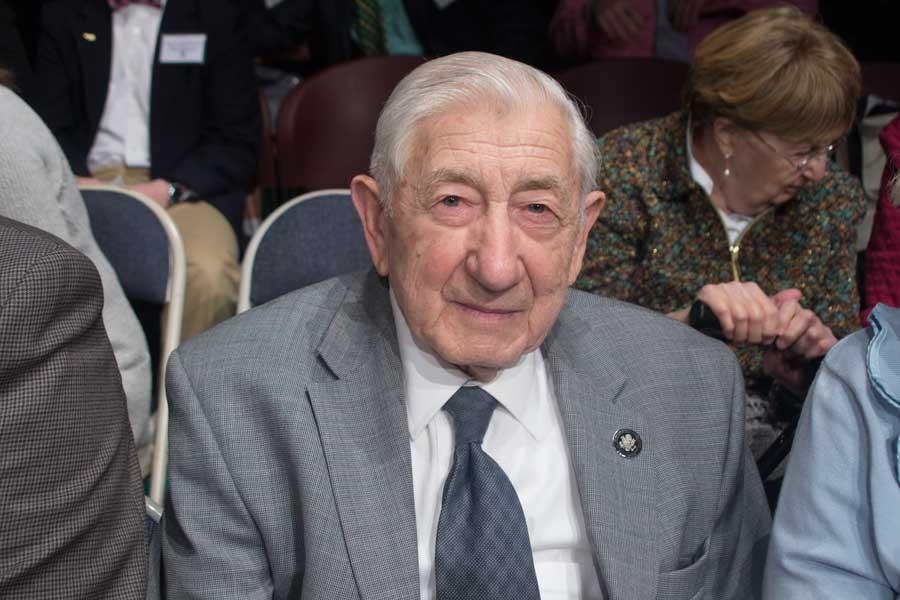 “Oh, they all line up before class to give me kiss,” 94-year-old Morris Rosen, also known as the “Zumba King” says with a hearty laugh at his own charm.

This charm and spirit Rosen exudes not only survived his many years on Earth, they survived, possibly, the worst years on Earth if you were a Jew in Europe during WWII: the Holocaust.

When Rosen enters, he crosses only a quarter of the room, staying close to the door. He didn’t want to sit down, he just wanted to share his story, or as much as he could. As he says before he starts, “It is difficult to condense five years into one hour.” So he stands there, steady, but with his hands shaking, reliving the most traumatic years of his life, which he claims he tells at least 50 times a year.

With a surprisingly loud, bold voice, Rosen tells of his life in a ghetto in Poland with about 5000 Jews where he worked as a brick-layer and painter. “You were not free at all,” he says.

Then, as Rosen’s right hand starts to shake a little faster, he tells of how German officers came and selected people to be deported – all people over the age of 40, women, and children, were all sent to the right including Rosen’s parents and his 12-year-old sister. Rosen however, was sent to the left meaning he got to stay in the ghetto, where he was locked out of his home and forced to sleep outside on straw with nine girls and six other boys.

Rosen was soon sent out of his homeland of Poland to a transition camp. Rosen later explains, with a resigned sigh, that after the war, he didn’t want to go back to Poland.

“I didn’t speak Polish for over 70 years,” he says. Now, however, Rosen tries to speak as much as possible, and jumped at the chance to speak his native language with senior Adam Mrowiec on Holocaust Remembrance Day.

At the transition camp, Rosen was asked what he did by an officer. Rosen timidly responded with the word “painter,” a word that led the officer to knock almost all of his teeth out. Then, with aggressive force, the officer held a pistol to his temple. “I wet myself,” Rosen bluntly states. “I thought he was going to kill me.”

Rosen was eventually put to work as a painter for the officer’s Polish mistress, and weeks later, when people from the camp were being sent away, a miracle happened: the officer asked Rosen where he wanted to go.

“He told me, ‘I don’t send you to Auschwitz.’ I didn’t know what they meant at the time,’” Rosen says. “When he asked me, I had a little hootspa, and asked to be sent to where my sister was – a women’s camp,” Rosen recalled, standing a little taller.

When Rosen arrived at the camp, “they beat the hell out of us,” he says. Then, to instill fear, they killed two random men. However, Rosen wasn’t afraid, and he laughs at his confidence as he tells of how the first night he ran over the electric fence with the risk of getting shot, knocked through the window of the building where their belongings were, retrieved his 200 pictures, and buried them in a metal can.

Every day, dead people were thrown out. Working at the camp was hard for Rosen, so hard that food wasn’t even desirable anymore. “The food will only help me prolong the dead – I want to die,” he recalls in a low voice.

Rosen then jumps to his evacuation from the camp to Russia, a journey that lasted for three days and led to the loss of 800 people. Each person only had a blanket or two, bread, and margarine. After eight hours, they finally rested, and Rosen, with the same spirit he still exhibits, stated his determination to survive. “I’m going to live.”

The camp in Russia is where Rosen was eventually liberated by a USSR soldier. Typhus ran rampant, and many people died once they were liberated. Rosen claimed he survived on only sardines and wine, and he attributes his survival to the wine. “The doctors told me the wine saved me. From that day on, I’ve had a glass of wine every day,” Rosen says with a laugh and soft smile on his face. That spirit and smile were contagious, and every face in the room found it easy to laugh along with him.

When Rosen finally had his first meal, with linen napkins and real food, he started crying tears of joy. “I felt like a person again,” Rosen says.

Now, Rosen, known by some as the “Jewish Forrest Gump,” lives an active, happy life in Baltimore, Md. Rosen has been invited to almost every Olympic games, has one of the biggest private collections of Holocaust memorabilia, and has even met Queen Elizabeth.

This world-wide celebrity, however, has not forgotten what has happened to him or what he has been through. He uses days like Holocaust Remembrance Day to tell his story. He willingly relives the pain in order to share his message.

“You can see what hate can bring. Be friendly to each other,” he says at the end of the hour, with a humble smile and a standing ovation.

Claire Grunewald is the Print Chief for The Patriot and jcpatriot.com.