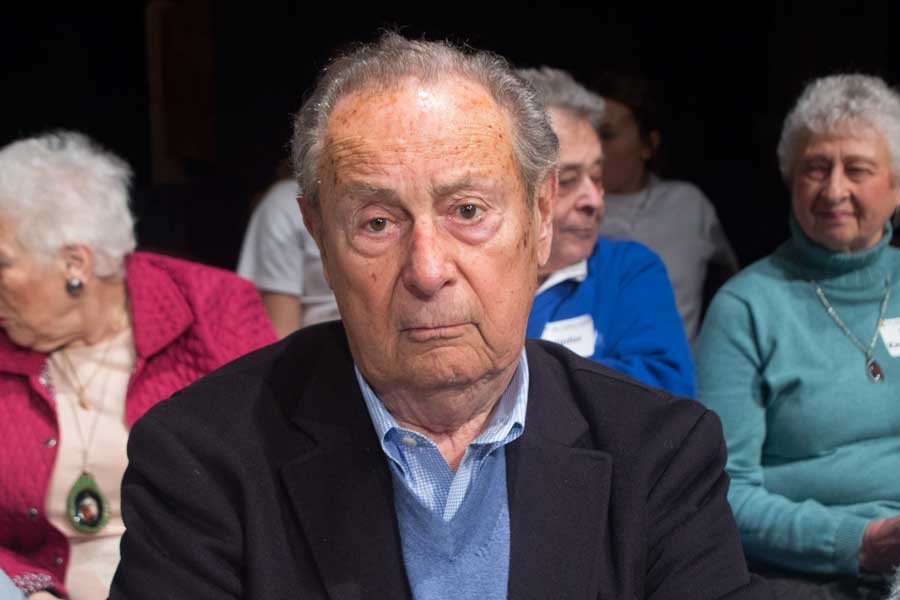 Will Bolton and Pia Scotto

Impact of a liberator’s life

From the moment Sol Goldstein stepped off the bus, there was no trace of the horrors he witnessed as a GI during World War II. He was nothing like I had imagined. Whenever anyone describes war heroes, they always forget that they are people. In fact, I had as well. When I requested to host a WWII vet who stormed Omaha beach on June 6, 1944, I forgot that it would only make up a tiny piece of a thoroughly incredible life.

It wasn’t that his descriptions of Normandy, Buchenwald, and the Battle of the Bulge lacked vivid detail, he just wasn’t focused on them. He was more concerned with impacts: how he dealt with what he saw and did, how he learned from the atrocities, and how he did his best to ensure they never happened again.

The most poignant of these impacts was his vow that “if ever a Jew was in trouble, I’d be there.” He lived up to his word in the years after the war, making trips all over the world to places like Lebanon and the USSR satellite countries to rescue Jews and help them get to Israel.

In one particularly bizarre rescue trip, Goldstein was stopped by a Soviet police officer who wanted to know what was in a suitcase he was carrying. Despite the direness of the situation, Goldstein kept his good humor. He opened the suitcase to reveal a jumble of women’s clothing which he was taking to a woman he was rescuing.

When asked repeatedly who the clothing was for, he assured the guard that it was for himself and that he was, in fact, a cross-dresser. Unfortunately, the police officer did not understand what a cross dresser was and was, in no way, impressed by Goldstein’s explanation.

Here in the story, Goldstein’s face split into a broad smile and he laughed as he ended his tale: “Well the guard didn’t have a sense of humor so I did ended up in jail for a couple of days.”

Will Bolton is the Perspectives Editor for The Patriot and jcpatriot.com.

From a soldier’s perspective: Sol Goldstein 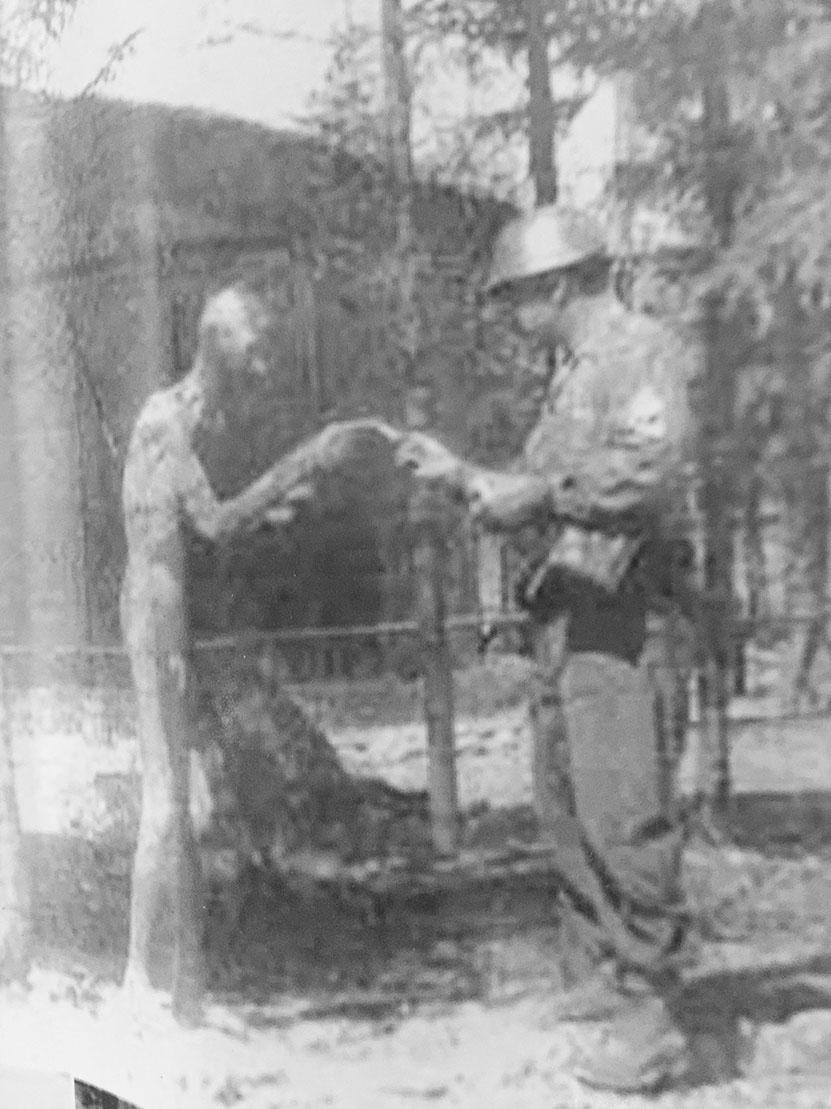 93 year-old Sol Goldstein was born in  Baltimore and was a World War II soldier and liberator. Goldstein began his journey by enlisting himself in the army without telling his parents. “My dad was really upset and my mother was beside herself,” Goldstein said.

He also recalls his mother being unrecognizable, “When I left to go to the army, my mother’s hair was black and when I came back, I looked at my mom, and I saw this little white-haired lady, and I said, ‘Excuse me,’ and I looked at her. She was crying and reaching for me, and I said, ‘Mom?’ and she said, ‘Yeah?’ I just couldn’t believe it was my mother – her hair was snow white.”

“I wrote to my family through what was called v-mail as much as I could. But even though I always thought about them and wanted to write to them, there was something more important, and it was staying alive,” Goldstein said.

Goldstein would soon travel to many places, including England, Germany, Poland, Holland, Belgium, and more. He was first shipped to England for his year of training. Once done with training, Goldstein was ready for battle and what came along with it. This included brown uniforms and the two pairs of socks he would place in between his plastic and steel helmets.

Throughout the war, Goldstein was called “Lucky Sol”. One event in particular where he was lucky was the harsh winter they had encountered while going from Holland to Belgium. “It was so cold that we lost a ton of people from freezing,” Goldstein said.

Tensions began to rise as well as dangers across the road. In battle, they had met Germans who had infiltrated and attacked in vicious ways. “They would fire at the trees, and so there would be pieces of trees that would just penetrate into your back like wooden splinters. It was just really painful,” Goldstein said.

Getting hit in battle, stashing a chocolate bar is his pocket because he didn’t know when his next meal would be, sleeping under cars or against a tree for only two or three hours only to go into battle again, Goldstein recalls, “I just remember realizing nothing about life was normal.”

When in Germany, Goldstein had saved his very first set of people from a concentration camp, and it all began with the clouds. “We saw this red brick chimney about 30-40-feet high, and there was white smoke binding out of the top of it, and as we got closer, we could smell the smoke become more intense, and we knew something was going on here,” Goldstein said.

Looking through his glasses, Goldstein saw fencing and barbed wire, and his corporal said he saw people in there and at that moment, Goldstein stated, “I think we’re gonna liberate a Prisoner of War Camp.” Going in, Goldstein realized they weren’t soldiers, but rags of people, and he couldn’t be more confused. “During my whole time in the service, I had never been told of such a thing as a concentration camp,” Goldstein said.

The people came shuffling toward him and one man who was five-feet tall around 50 pounds came up to him, asking him in German, “Are you Americans?” To which Goldstein replied in Yiddish, “Yes, we’re American soldiers, and I’m a Jew.” The man looked up and said to him in Yiddish the question that would stick in Goldstein’s mind forever. The one that made him dissolve and burst into tears. The man asked, “What took you so long to get here?”

“From that moment, I knew, that if my mother had not come to America in 1913 from Lithuania, and my father in 1917 from Egypt, that I could possibly have been one of them,” Goldstein said.

At one point, Goldstein held a German captive. He questioned him and revealed to the man that he himself was a Jew. In disgust, the man spat in his face and called him a “dirty, pig Jew.” Immediately, Goldstein raised a knife and cut his neck from ear to ear and disposed of the body in the woods.

Goldstein was soon told that the war was over and that the Germans surrendered. His corporal said to him, “It’s all over, you can go home now.” It’s all over? The words didn’t settle nicely for Goldstein. Was it all over? He didn’t want to go home. He wanted to continue to help, and so that’s exactly what he did in Paris for seven months. Goldstein finally returned home in 1946 to find the Civil Rights movement occurring.

When at home, his wife helped him through everything. In fact, he recalls the day he met Jean Turk to be the most memorable and favorite of all his days. “She was literally my therapist after the war. She would hold me in her arms at night, in the bed, and say, ‘It’s all over hunny, it’s all over.’ And I’d be screaming or crying and carrying on, and she would just hold me and just make it okay,” Goldstein said.

Looking back at it all, Goldstein hopes everyone would understand that war is not a good thing to go through. “I’m amazed that world has not learned a lesson. After WWI, they said this would be the war to end all wars. After WWII, they said they same thing. We never seen to learn unfortunately the amount of people who lost their lives, is unbelievable,” Goldstein said, “There’s nothing glorious or heroic about war.”

Today, Goldstein has three sons, the oldest being 68, five grandchildren and ten great-grandchildren. He explains all the changes that had happened in his life. From not being able to bring his black friend into a restaurant, to the day there were no black children in school. To not buying books anymore, but reading them off an iPad.

“We have moved on in life. We reached the moon! I’m sorry I’m not gonna live to see the day when you go into a restaurant and get three pills, and that’s your meal. That is going to happen!” Goldstein said. “For me, everyday is a new adventure. It’s exciting!” Goldstein said.

The crowd brings you nothing but happiness. They tell you that you look no more than 80, and that your optimism is infectious. They cannot get enough of your warm soul and sweet personality. As a response, you smile your bright, bright smile. The one that shines throughout the room so bright that it punches any shred of darkness the eye can see.

Pia Scotto is a Community Editor for The Patriot and jcpatriot.com.