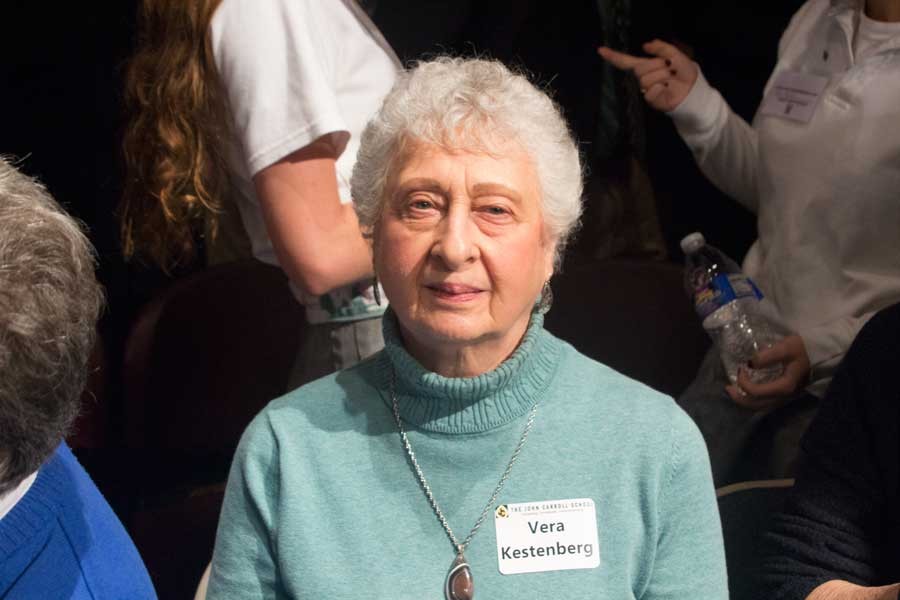 Vera Kestenberg, seven years old, looks though the darkness of the tunnel at her mother, who gives her a hug and rips the yellow star off of her daughter’s coat. She tells her to get to the other side of the tunnel as fast as she can. As Kestenberg starts walking, she turns around to look back at her mother, not knowing if she’ll ever see her again, and looks on as her mother walks in the opposite direction.

As an adult retelling this story, Holocaust survivor Kestenberg remarks with sadness that she knows her mother didn’t turn around so that she would not see the tears streaming down her face.

“Can you imagine sending your seven-year-old daughter through a dark tunnel, not knowing if you’ll ever see her again?” Kestenberg says now, as a mother, grandmother, and great grandmother, unable to imagine the strength her mother must have had to do what was best for her daughter.

Fast forward to 2016. Vera dismounts the bus in front of JC with a big smile on her face and hands above her eyes to block the sun on a beautiful day. Kestenberg was one of eighteen Holocaust survivors who came to JC for Holocaust Remembrance Day.

Students were able to witness and learn from the wisdom and serenity of a woman who lived through one of history’s greatest atrocities. Kestenberg recounted her story with a certain grace that reflects her peacefulness as a person today.

“Anger doesn’t take you anywhere,” Kestenberg says definitively, speaking about everything she had to do personally during the Holocaust, as well as the general horror of this time in history.

The fact that Kestenberg lives by this sentiment becomes even more powerful given the context of her life. As a little girl, Kestenberg’s childhood was robbed from her. She had to change her name and learn how to be Christian and most importantly, cover up any evidence that she was Jewish.

Kestenberg could have a pessimistic and bitter outlook on life, but instead she is a radiantly happy person who shares her stories in order to let others learn. “One knows the stories, but one doesn’t know,” Kestenberg says in regards to her late husband who was held in several different concentration camps.

To Kestenberg, one of the most important things in life is learning. In a time when people’s rights were stripped from them, Kestenberg remarks that what you learn can never be taken away from you.

She continues her story, saying that she worked on a farm while she was in hiding, and recounted how as a little girl she learned how to milk a cow and do other farm work. Even in such a dark time, Kestenberg was excited to learn something new, and she recognizes the value in the skills she learned. Even in the darkest of times, something positive can be found. Just take for example that Kestenberg had to change her name, but she was still excited to learn how to feed pigs.

Although, by no means was Kestenberg’s life easy. Kestenberg lived in Hungary, one of the last countries invaded by Hitler, which made the persecution of Jewish people in Hungary more short lived than that of other countries that were invaded sooner. Kestenberg considers herself lucky in this regard, as her experience was “easier” than others.

Still, ghettos were created and people were taken to camps, and in the case of Kestenberg, people had to go into hiding. This isn’t exactly what most people would call “lucky.” However, it was obvious that Kestenberg felt blessed to have had a relatively “easy” life, and that her entire family survived.

Katie Sullivan is an In-Focus Editor for The Patriot and jcpatriot.com.