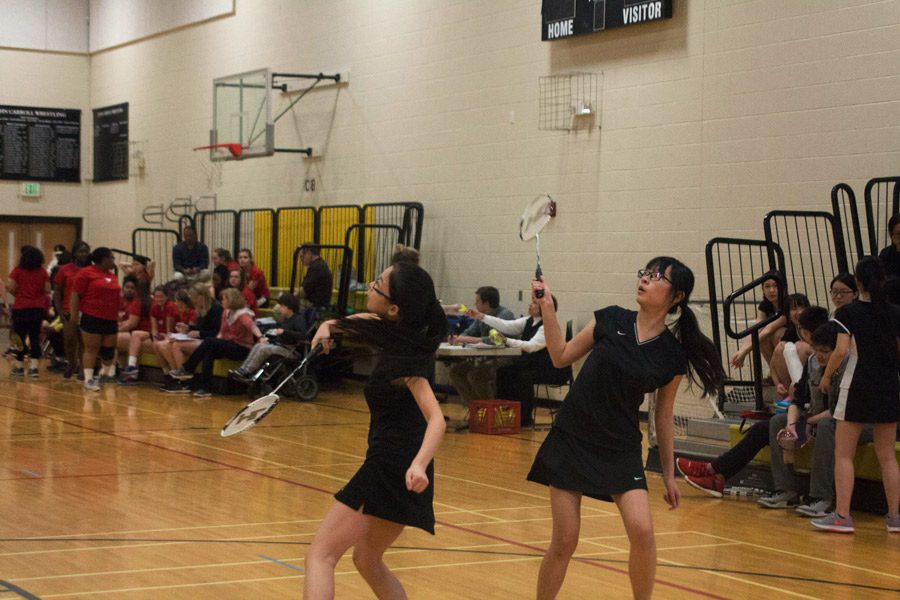 Senior doubles team Lucy Chen and Vanilla Tong prepare to smash back the shuttlecock. The badminton team finished with a 6-2 record on the season.

The varsity women’s badminton team had a successful season, finishing with a record of 6-2. “The team did much better than expected,” varsity assistant coach James Fendryk said.

Even though the team lost a lot of players who graduated last year, the team stepped up to the plate and performed well.  “The team as a whole performed well, we were all pretty good,” junior singles player Hanna Frey said.

The team had a few players who stepped up and won some big games this season. Juniors Giana Liberatore and Emily Schiavone were moved up to varsity this year and came second the doubles division. As well, sophomore Lily Chen won the singles division.

According to Fendryk, the whole team improved a lot this season as well. “The girls became more mobile which allowed them to do more on the court,” Fendryk said.

Even though it was a successful season, the team still had competition from other teams. According to Frey, Maryvale Preparatory School and the Oldfields School were the toughest competitors. “It’s always hard going into games when you are competing against a tough school, but you pull together as a team and just try your best,” Frey said.

“Even though it is badminton, it can be hardcore,” Frey said.

Adriana Guidi is an Entertainment Editor for the Patriot and jcpatriot.com.